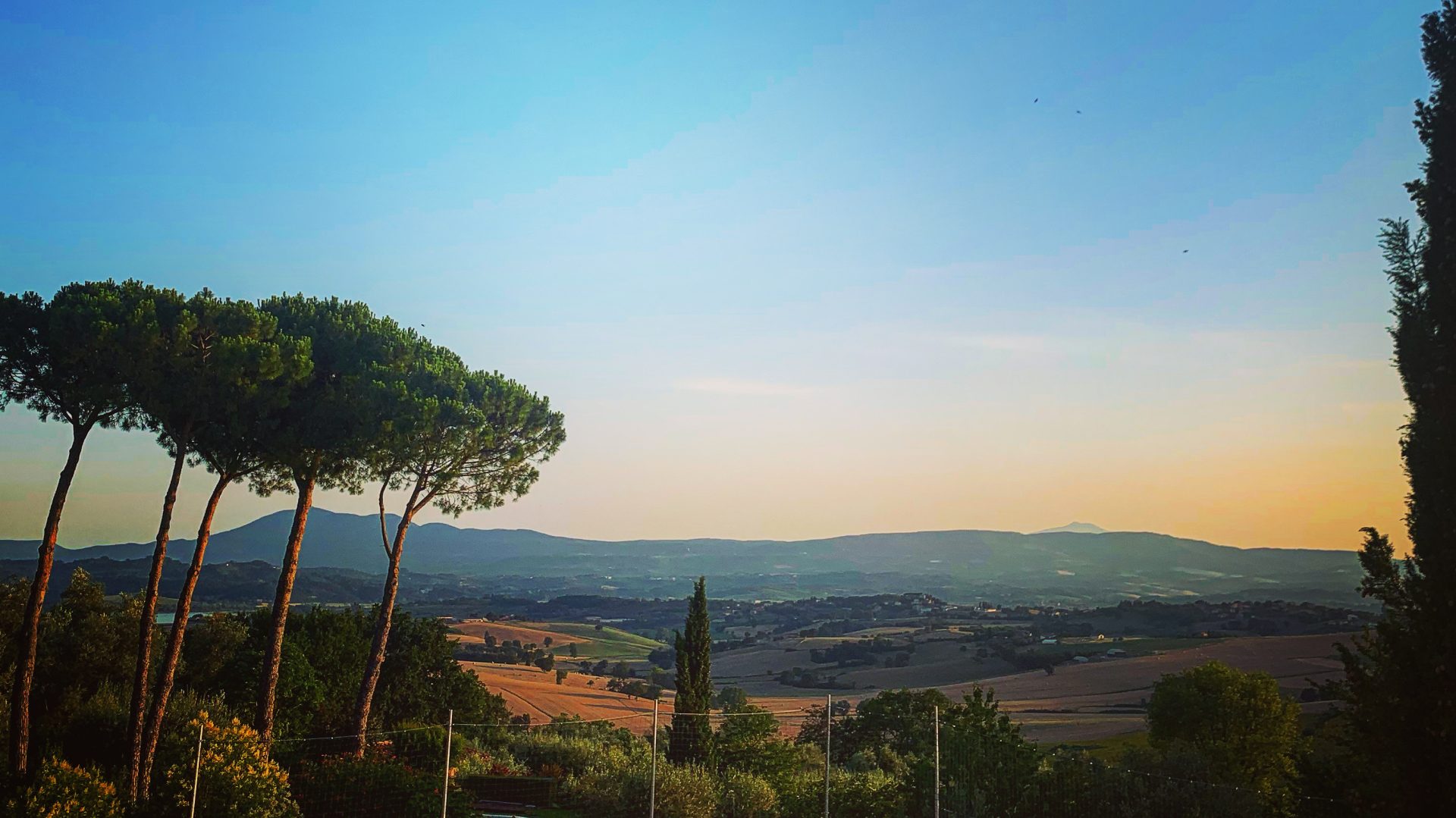 A GUIDE TO THE FOOD OF UMBRIA AND TUSCANY

Following the ancient Roman roads of Umbria and Tuscany you notice threads of golden sunlight embroidering the landscape coaxing the very best seasonal flavours from fruit and vegetables.
Of course, there are also regional specialities galore. But the unifying secret to Italian cuisine is this: high quality seasonal produce prepared with pots of passion and tempered with simplicity.

If there is one single ingredient that brings all the flavours of Umbria and Tuscany together; it is EVOO. The superlative virginal queen-of-green herself: cold pressed extra-virgin olive oil. With acidity as low as 0.01%, Umbrian EVOO is pure, unrefined and unadulterated by heat or chemicals during the extraction process. This allows the full rich, fragrant olive oil experience. The best time to taste it is just-pressed in September – November. Table colours vary from bright spring green to autumn-gold.
At Villa Gioiella Holiday Home on the Umbria | Tuscany border you will enjoy olive oil from the olive grove. Once you have samplled the real flavour of fresh olive oil it is impossiblle to go back! To order at home (international delivery) or to buy to take home, Villa Gioiella recommends OLIVANDO. Grown and harvested by wife and husband team, Amanda Forman and Marco Simonelli See more on their website HERE

Compared to olive oils from around the world, Italian EVOO retains its spot as internationally renowned for a reason: its low acidity level, richness, and variety of fragrances. In Umbria the secret is the extreme change in weather conditions from summer to fall. Other Italian EVOOs are often described as delicate, with notes of almond or ripe tomato, while sensations of bitterness and spice characterize Umbrian EVOO. Is the best? I’d love to hear that conversation played out at a mixed-region dinner table! ”

The Val d’Orcia is Southern Tuscany’s quintessential Renaissance-painting landscape. Ravishing hills wiggle down to flat chalk plains and sunlight casts curious shadows. A UNESCO World Heritage Site, the valley is bordered by Siena, and Mount Amiata. For centuries the area has attracted the artistic, entranced the romantic and satiated the hungry traveller. The picturesque towns of Pienza and Montalcino are not only quaint and ancient – but they are veritable foodie super-powers.

Pecorino Stagionato, served with pears or drizzled with strong chestnut honey. Pecorino can be used to finish pasta dishes as an alternative to Parmegano.

Trasimeno cuisine is as diverse as the landscape. The lake is surrounded by rich rolling countryside so perch, pike, carp, tench and eel often share the same menu with Chiana beef, pheasant and wild boar. All dressed in local virginal olive oil. Umbria is famous for its truffles and Trasimeno is no exception. Best in Autumn, served with local homemade pasta such as pici. Many restaurants are dotted along the waterfront near the towns of Castiglione del Lago and Passignano sul Trasimeno.

Carnivore, vegetarian, and these days increasingly gluten-free, the restaurants, markets and supermarkets of Tuscany and Umbria offer something for everyone

The frisky flavour of fresh truffle was once banned by the Catholic Church for its sexy aphrodisiac aroma.
These days, there are two types of exciting truffle experience: the first is to eat them in a local restaurant. The second is to go out and dig them up. Umbria produces the highest number of black truffles in Italy.

First raised by the Etruscans, Cinta Senese are the predecessors of all Tuscan breeds. Cinta in Italian means ‘belt’ and they are so-named because for the black (or white, depending on how you see it) band around their bellies. (Senese, for Sienna – the region in Tuscany).
After the import of more productive and prolific breeds, pig-farmers, quite understandably, focused on maximising profits. For a while there, things were looking extremely bleak for the hungry porkers. The indigenous breed were teetering on extinction until 2012, when thanks to a Government backed project, they were granted Designation of Origin (PDO) status. Now recognised worldwide as a ‘niche product of exceptional quality’. Free to roam the forests, the low fat meat tastes of forest acorns, hazelnuts and chestnuts. The Spanish have their Pata Negra jamon and Tuscany has its Cinta Sense prosciutto.
Cinta Senese meat is cured according to the cut.
Finocchiona is a Tuscan salami dating back to the Middle Ages. It was created when butchers replaced expensive pepper with aromatic wild fennel, prevalent in the fields of Tuscany.
Guanciale the cheeks are crafted into prized guanciale, a delicious cured-meat enjoyed thinly sliced or slightly heated and then placed on unsalted Tuscan bread.

While on the subject of pigs, one of Umbria’s favourite street food, is the ubiquitous porchetta. A whole suckling pig is spit roast for 8-hours, and stuffed with wild fennel, garlic and rosemary, to become the region’s most famous succulent sandwicH

THE CUISINE OF UMBRIA AND TUSCANY

Peasant fare from days when ‘food waste’ was a survival issue. Today, the recipes of cucina povera have been handed down through the generations that are still as tasty, hearty, economical and sustainable as they always were. The staples include rice, pasta, polenta and gnocchi with beans and legumes for protein. Day-old unsalted bread is added alongside and locally grown produce – carrots, silver beet and cabbage these dishes are hearty, delicious and mainly vegetarian. Examples are:
RIBOLLITA Which means ‘reboiled’. In days of yore from leftover minestrone soup which was then re-imagined with stale bread, beans and EVO olive oil. So hearty, I hesitate to call it soup
Pappa al pomodoro A thick Tomato soup made with day-old bread, olive oil, garlic, basil, and other seasonal ingredientserved hot, room temperature, or chilled

Slow Food in Umbria and Tuscany

The regions of Umbria and Tuscany are known as the Slow food capital of Italy. Umbria earned its name as, ‘Italy’s green heart’ millennia ago when the Etruscans first farmed the fertile lands. Through the ages, locals have been rewarded with an abundance of seasonal flavours. With a dash of salt, a twist of pepper, or a splash of wine, flavours needs very little coaxing from the freshest of ingredients.

There is a gastronomic certainty (which is never boring!) to the food and cuisine of Umbria and Tuscany – and Italy in general. With each season, a new world of produce, flavours, colour, shape and texture emerges on dining tables around the country. And the passion with which this food and wine is produced, prepared and discussed by Italians is another gastronomic certainty.

Ulisse Brandli, maker of exquisite Pecorino cheese at Podere il Casale, an organic farm with eye-stetching views over the Val di Chiana explains: “You have to follow the seasons. Making cheese is like the terroir of winemaking. The climate, geography and seasonal vegetation (clover or hay) the sheep are eating all affect the flavour of the cheese.”

Spring FOOD in Umbria and Tuscany

Fruit blossoms, wild flowers and budding grapes breathe a collective sigh of relief after the cold winter. Expect wild asparagus, fresh artichokes, fennel, rosemary, strawberries and sage to feature on the supermarket shelves and the restaurant dishes. This is time for the salty-sweet tongue-teasing prosciutto e melone

SUMMER FOOD IN UMBRIA AND TUSCANY

Summer explodes with brazen tomatoes, zucchinis and their bright yellow zucchini blossoms stuffed with mozzarella that fry delightfully. Peppers, eggplants, cucumbers and fruit conspire to perfect many an al-fresco meal. Baking summer days sliced by siesta, crawl languidly into long warm evenings. Festivals (called sagra or festa) celebrate the local all-star produce. Be it lentils beans or bistecca steak. Local bands provide live music for old-time dancing and people of all generations eat together under the stars. It may be a bit overwhelming for first-time visitors to order – but the menus are always written down – just follow the signs and join in.

Autumn FOOD in Umbria and Tuscany

Vendemmia, or harvest, is a riot of vermilion and falling leaves. And by most people’s reckoning, harvest time is the best time to enjoy the full flavours of the local cuisine. Expect blue-skies, sunshine and sampling of the year’s first virginal olive oil. A sexy, spicy green revolution of the tongue. Pumpkins surrender in creamy risotto and chestnut flour treats such as castagnaccio (a thin heavy cake) are eaten with un café. Porcini mushrooms, and famed black truffles appear now on the menu too.

WINTER FOOD IN UMBRIA AND TUSCANY

Roasted chestnuts fill the frigid air with their sweet burnt perfume. Venturing into the wilder regions, local bars, fill with jovial men searching for wild boar. Restaurants offer hearty meat dishes such as cinghiale ragout served with pasta or polenta. Expect to find thick warming soups, made from vegetables and bread. Ribollata is a hearty soup made from leftover bread and lots of vegetables. Tongue-melting porcini mushrooms and black truffles, all served with a big, bold Tuscan red wine.